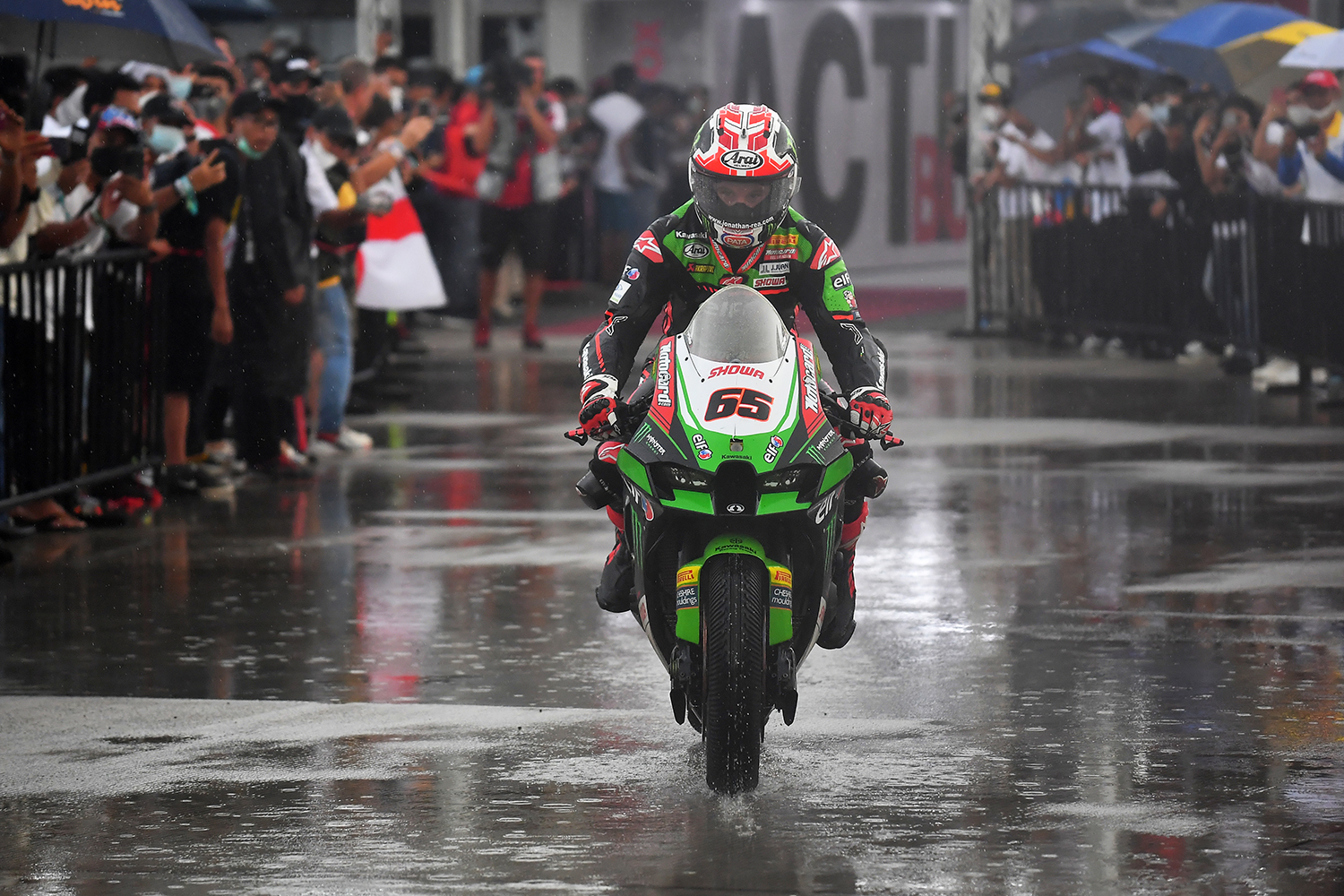 Jonathan Rea conquered both dry and wet track conditions to win each WorldSBK race at the inaugural Mandalika WorldSBK round in Indonesia and end the season just 13 points from the championship win.

With a violent rainstorm cancelling the planned Race One on Saturday at the brand new Indonesian circuit, all the race action took place on Sunday 21 November. The Tissot Superpole Race was replaced by a full distance 21-lap Race One and then Race Two scheduled over the same distance.

The first race was cut to 20 laps after a short fall of rain, but got underway 15 minutes later than planned, with all the riders on slick tyre options.

An incredibly entertaining first race saw Jonathan Rea demonstrate all the pace and fighting qualities that have made him a six times World Champion, doing all he could to hold onto his title. His Race One victory came after a performance full of commitment and determination, with Rea sometimes leading and sometimes having to fight with three other riders.

In the final sector he was in control out front but needed another rider to get between him and Toprak Razgatlioglu to allow the championship fight to go the very last race of the season. Razgatlioglu moved himself from third place to second close to the end and that was enough to decide the championship in his favour.

The second race was run in fully wet conditions and the start was delayed for well over an hour to allow the monsoon level of rainfall to reduce and the track to be inspected and finally made safe for racing. After all the delays the race was run over 12 laps, not the planned 21, but with full points awarded.

Rea and three other riders put on a superb show of full commitment wet weather racing on a track surface they were all still getting to know.

Race Two eventually ended up in a straight fight between Rea and Redding, with Jonathan coming out on top for the second time to record his 13th race win of the 13 round season.

On the slow down lap at the end of Race two Jonathan stopped trackside and his technicians reapplied his famous number 65 to his Ninja ZX-10RR, before he made his way back to the podium ceremony

Jonathan Rea said: “A super day of racing, super-content with that. After FP1 on Friday we faced some difficulties and to rebound like this - to come back and win in the dry and win in the wet - I’m super-happy. Especially so for the Mandalika fans because to get a Race Two was really good. I was really hoping the organisers would use that period after the heavy downpour to say yes to the track evaluation. When we knew were going out I was excited to race. Really excited. I tried to set a good pace directly in Race Two but Toprak and Scott were also very fast. I could understand where they were fast so I just rode with nothing to lose, to go out on a high. That was the target this weekend; to go home satisfied with my effort. We can really say that we have no regrets this year. I rode my maximum, with all my heart every race. Congratulations to Toprak and his team. They did an incredible season, they were very fast.”