One of the most talented young racers in any class of competition today, Jonathan Rea started his two-wheeled education early, winning the British 60cc motocross championship in 1997. He moved through the motocross classes and made the leap to road racing in 2003, in the British 125cc championship.

After running in Supersport for a time, and having recovered from a serious injury along the way, he moved into the prestigious British Superbike class. He became the youngest ever rider to secure a BSB pole position in 2005, and his talent was now moving beyond mere potential.

Five race wins and 16 podiums in total helped take him to the runner-up spot in 2007, before wider horizons beckoned.

He made the transition to the World Supersport championship in 2008, debuting in the series with the HANNspree Ten Kate Honda team. Riding Honda's CBR600RR alongside eventual world champion Andrew Pitt, Jonathan finished as runner-up in the championship in his rookie season, winning his first race at Brno and three in total.

He took his first WSBK steps even before the 2008 season had been completed, moving up to the Hannspree Ten Kate Honda Superbike team for the final round and impressing all who watched him attack the leading riders at Portimao.

In 2009 he moved up to World Superbike level with Ten Kate full-time and his mature approach to machine development paid dividends, despite the high-class field of competitors he was up against. His methodical work ethic and dynamic riding style were rewarded with two race wins and a further six podiums, good enough for fifth place overall.

For the following season, a top three championship finish seemed inevitable until a nasty fall at Imola injured his left shoulder and wrist, leaving him unable to defend his points advantage in the final two rounds. He was finally ranked fourth, missing third by only five points, however, his four race wins and ten podiums in total marked him out as something special.

The 2011 season began with injures sustained in a pre-season testing crash in Australia and, in spite of a win at Assen in April, worse was to come. A high-speed tumble at Misano left Rea with a wrist injury that left him sidelined for three months.

However, in his absence, the Ten Kate crew worked tirelessly with electronics partner Cosworth to develop a ride-by-wire throttle system that gave Rea a comeback win at Imola and pole positions in Magny-Cours and Portimao.

Two further race wins at Assen and Donington Park – along with four second place finishes – followed in 2012 but Rea could only match his fifth place overall from 2009 as the World Superbike championship proved once again that technical development of the world’s finest sportsbikes does not stand still for a moment.

Injury struck again in 2013 at a point in the season when Rea showed that he and his team had begun to dial in a sophisticated new electronics package. While battling with the leading group at Nurburgring, he crashed on oil from another rider’s machine, fracturing his left femur and ending his season.

In 2014 Jonathan remained with the Ten Kate squad and continued to defy the odds by consistently recording strong results. Over the course of the season he won four races, including a double at Imola, and claimed five other podium places, all of which secured third place overall in the Championship.  This was his best finish in the Superbike class to date.  At the end of the year it was announced that Jonathan would end his long association with Honda and would move to Kawasaki Racing Team to race the Ninja ZX-10R alongside 2013 World Champion, Tom Sykes.

The new season and the new partnership with Kawasaki could not have started any better when Jonathan won the first race of the season at Phillip Island in Australia.  This set him on an unbelievable run of form that continued all season, culminating in the World Championship crown being secured three rounds early at Jerez in Spain.  In total Rea’s dream season included 14 wins and 23 podiums, amassing 548 points, just a few short of an all time record.

The 2016 Championship began in the same way with Jonathan, in his second year with Kawasaki, scoring eight wins and 16 podium finishes to reach the season summer break with a commanding lead.  It was only an uncharacteristic technical fault that ended that run at the US round in Laguna Seca. In a thrilling season finale, where the Championship was only decided at the final round in Qatar, another win and five podium places brought Rea the Superbike world title once more.  He joined illustrious company by being one of only four riders to secure back to back world titles in the history of the FIM Superbike World Championship.

In 2017, Jonathan created yet more Superbike history by becoming the first rider to secure three back-to-back titles. Along the way he won no fewer than 16 of the 26 races, while a further eight podium finishes took him to the largest points total in the championship’s history, breaking the 2002 record of Colin Edwards.

Further records tumbled in 2018, including his 60th World Superbike victory at Brno in the Czech Republic, overhauling the long-standing record of WSBK legend, Carl Fogarty and equalling the most number of wins in a season at 17, set by Doug Pollen in 1992.  His Superbike career wins tally now stands at 71 (56 for Kawasaki).  Most importantly in 2018 Jonathan claimed his fourth consecutive FIM Superbike World Championship title, equalling Fogarty's record of championship crowns but being the only rider in history to win four in a row.

2019 was possibly the toughest year since Jonathan joined Kawasaki back in 2015.  It was a season of two halves where perennial rivals Ducati, and their new rider, Alvaro Bautista, set off with a winning streak that ran for the first four rounds.  However, come round five in Imola Jonathan bounced back with a double win.  He and the Kawasaki team continued to push and by round eight at Donington Park, JR had taken over the series lead and would once again clinch the championship at Magny Cours in France.  In total Jonathan won 17 races in 2019, extending his career total to 88 (73 with Kawasaki) and bacame the first rider in the history of the championship to win five world titles.

The 2020 WorldSBK season began as normal with the first round taking place in Phillip Island, Australia.  Jonathan endured a mixed weekend and returned to Europe fourth in the Championship standings. In a few weeks however the entire world stopped in the face of the Covid-19 pandemic. Racing eventually got back underway in the FIM Superbike World Championship at the Spanish venue of Jerez at the end of July but the season was cut to eight races, all in Europe, as a result of the restrictions on international travel. In the shortened season Jonathan would have a back and forth battle with WorldSBK rookie Scott Redding (Ducati) but at the final round in Estoril, Portugal it was Rea that won out securing his and Kawasaki's sixth conscutive world title.

In 2021, on an improved Ninja ZX-10RR, Rea battled with eventual champion Toprak Razgatlioglu throughout. A thrilling finale, in which Rea won both races at the all-new circuit of Mandalika, saw Jonathan miss out on championship number seven by just 13 points.

In 2023 the statistically greatest World SBK rider of all time will be out to regain the status of world champion again, with a will-to-win undimmed by all his vast previous success. 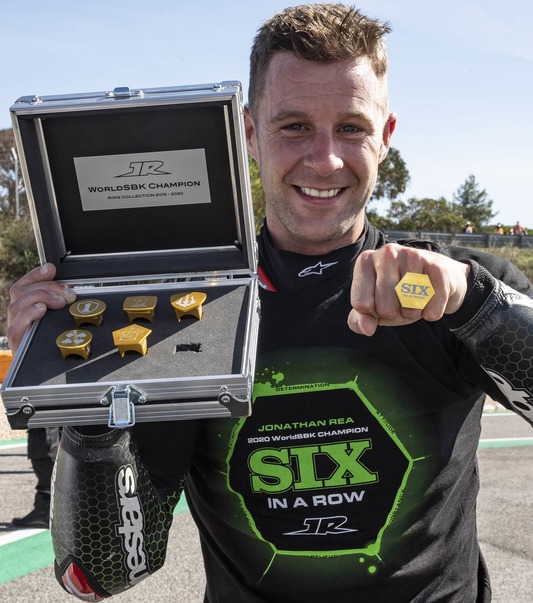