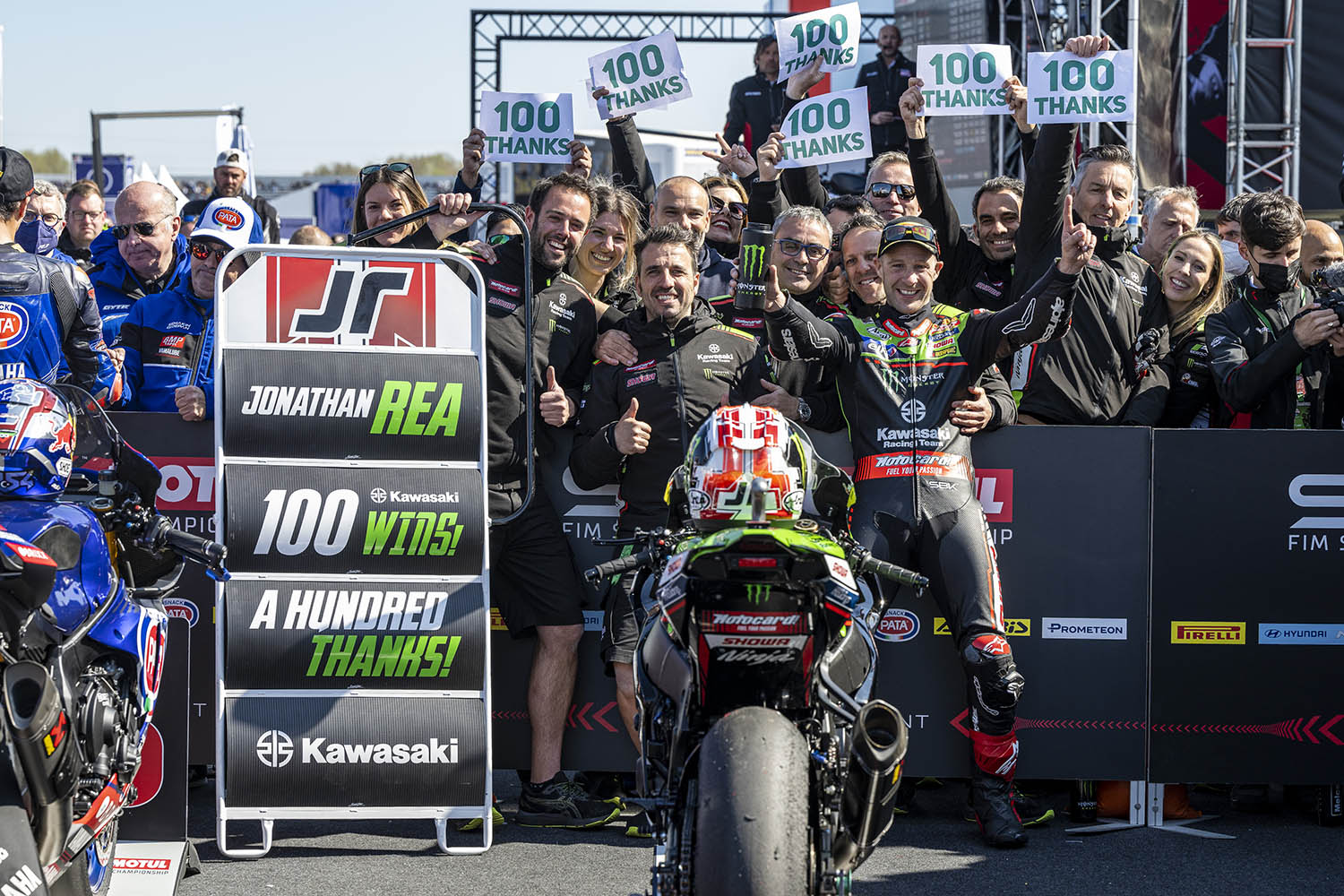 Jonathan Rea became the first rider to break through the barrier of 100 race wins for a single manufacturer after taking the Superpole Race victory at Assen. An unfortunate collision with a rival in the second race then saw Jonathan no-score.

The planned ten-lap Superpole Race was shortened to nine laps after a sudden red flag was shown on the starting grid. One of the competitor’s machines developed a technical issue that had to be checked before racing could continue.

Rea used all his experience to go from fourth and the end of the first lap to take the lead on the final lap from Alvaro Bautista (Ducati).  Rea’s eventual margin of victory was 0.220 seconds, however, Bautista lost one position for exceeding the track limits on the final lap, promoting Toprak Razgatlioglu (Yamaha) to second.

Rea was in confident mood in Race Two, hunting a trio of Assen race wins. He was riding in second place, having closed in on early leader Razgatlioglu, when his rival ran wide into Turn One on lap six. As Razgatlioglu came back onto the racing line Rea was already there and they collided, with both crashing out of contention and no-scoring. The race was won by new championship leader, Bautista.

In the overall points’ standings Rea leaves Assen second and Lowes is tenth overall. Rea has 91 points to Bautista’s 109, with Razgatlioglu third on 64. Lowes has 28 points.

After Assen, Round Three of the WorldSBK championship will take place between May 20-22, at Estoril in Portugal.

Jonathan Rea, stated: “In the crash in Race Two, from my point of view, I drew alongside Toprak on the start-finish straight. He braked 15 metres later than normal. He stopped the bike on the kerb before going off and sacrificed so much speed that my normal apex racing line was so much faster. In this situation at Assen normally the guy on the outside gives way, because someone is coming on the inside. Like I did in Turn One, in the first lap of the race with Lecuona. I went deep - and I understand that you can’t come back onto the track. You cannot make sudden movements into the racing line. I was committed to my line going into T2 later in the race. I was in front when we came together because he hit my hip on the rear side. Unfortunate, as it really soured our weekend. My team gave me an incredible bike for the race. I am frustrated for myself, but also Toprak and the fans. We were deprived of a good race. Two into one when that happens doesn’t work. We have to be happy with taking 100 race wins for Kawasaki in the Superpole Race. It was a great morning for us! It didn’t finish in the best way but I think we can take a lot of confidence that our package is working really well.”