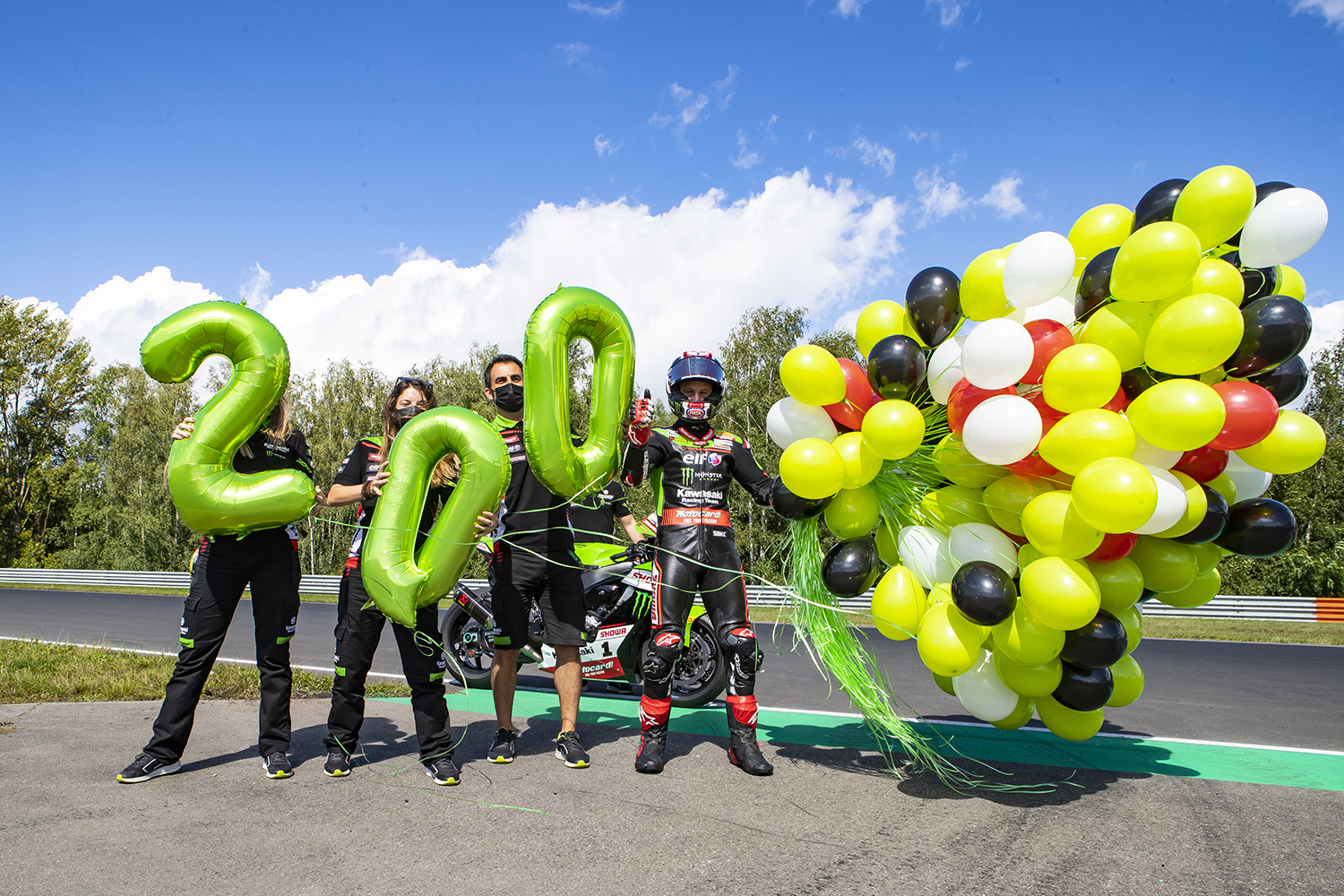 Six-time FIM Superbike World Champion Jonathan Rea reached a new landmark today as he claimed his 200th WorldSBK career podium, finishing third in the ten-lap Tissot Superpole race at Autodrom Most in the Czech Republic. He then extended that to 201 with another third place in WorldSBK race two. He also retained his lead in the 2021 WorldSBK championship race by three points over Toprak Razgatlioglu (Yamaha).

Rea has claimed most of his podiums on the Ninja ZX-10RR since joining Kawasaki Racing Team in 2015 and on the slow down lap of the Superpole race he was met by members of the KRT squad to release 200 balloons above the circuit to celebrate the achievement.

Rea also set a new lap record in the ‘sprint’ race with a 1’31.996 lap time as he harried eventual race winner Razgatlioglu early in the ten lap contest. He made a small error and ran off track at T1, with one lap to go, losing time Razgatlioglu. He would also lose a place to Scott Redding (Ducati) before the chequered flag, settling for third place. Redding would go on to win the 22 lap race two ahead on Razgatlioglu.

Navarra in Spain hosts the seventh round of the WorldSBK Championship, between 20-22 August but before the next round KRT will have a test session at their home circuit in Barcelona, on 12 and 13 August.

Jonathan Rea said “In the Superpole race I was completely on the limit, extracting all the potential from our Ninja ZX-10RR. It was a fun race but I made a small mistake and got sucked in behind Toprak a little bit. In the second race I had opted for the hard rear tyre, the more conservative option, because I never did many laps with the SCX tyre, except in the Superpole race for ten laps. My early rhythm was OK but I got a little bit stuck behind Locatelli, but after I went past him could not close the gap to Scott and Toprak. They had better rhythm today so it was more about third. I did not accept that on the grid but I thought maybe in the second part of the race it would come to me because I had the hard tyre, but I started with less grip and the drop off was the same. We are only halfway through the championship and the twists and turns that have happened already can happen in the second half of the season as well. At least I am at the top with a very small points gap to Toprak but we know who we are fighting and what we are fighting with. We have a lot of experience to lean on from the past, so I feel in a good position.”