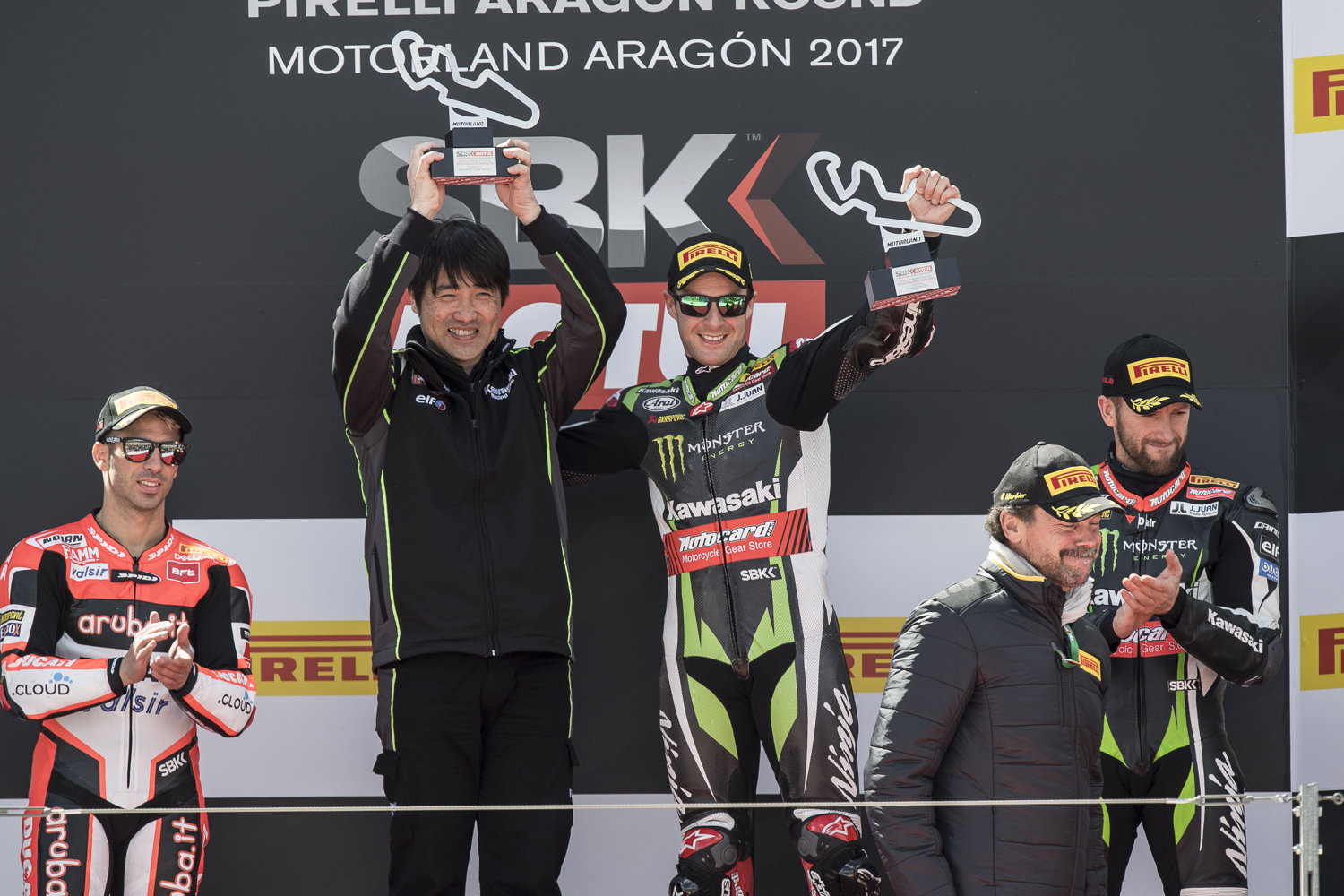 Jonathan Rea recorded his fifth straight win of the season in round 3 of the FIM Superbike World Championship at Motorland Aragon in Spain today. Kawasaki Racing Team’s Tom Sykes completed the podium places in third place behind Marco Melandri (Ducati).

Jonathan had started the day by claiming a front row grid position in Superpole Qualifying, behind pole sitter Chaz Davies (Ducati).  Davies got the best start and led for the majority of the race.  Rea made a move in the closing laps and took over the lead but Davies countered and regained the front position as they headed for the chequered flag.

On the penultimate lap Davies crashed out of the race in the last corner leaving Rea to romp home to victory, four seconds ahead of Melandri.

The victory maintains Rea’s 100% record of race wins for the season so far and with a maximum points score of 125 he now leads the standing from team-mate Sykes by 47 points.

Race two of the weekend will take place at 13:00 CET tomorrow where Rea will start from ninth on the grid as a result of the new 2017 grid regulations, which puts the podium finishers from race one on row three of the grid in race two.

Jonathan Rea, stated: “I made the strongest race I could do. Chaz was strong in areas where I was not, and I was strong in areas where he was not, so it was a case of me learning a lot in the race. The stopping performance, direction change and grip conservation of the bike was really good today and I felt I still had a tyre to fight with at the end, but in the middle section of the track, where Chaz was just in the front, I could not maximise any time to try to go away out front. The only thing I could do in that race was ride shotgun and put as much pressure on as I could and wait for a mistake. The door opened up a few times because Chaz missed a few apexes but finally he went down in the penultimate lap. First of all I hope Chaz is OK but for me it was a perfect opportunity to win another race. It was going to be very difficult to win a last lap battle with him in that last sector where he was so strong. It is a crash-gifted win but I will take it because I felt I rode well.”