Jonathan Rea Reflects On A Busy Off Season 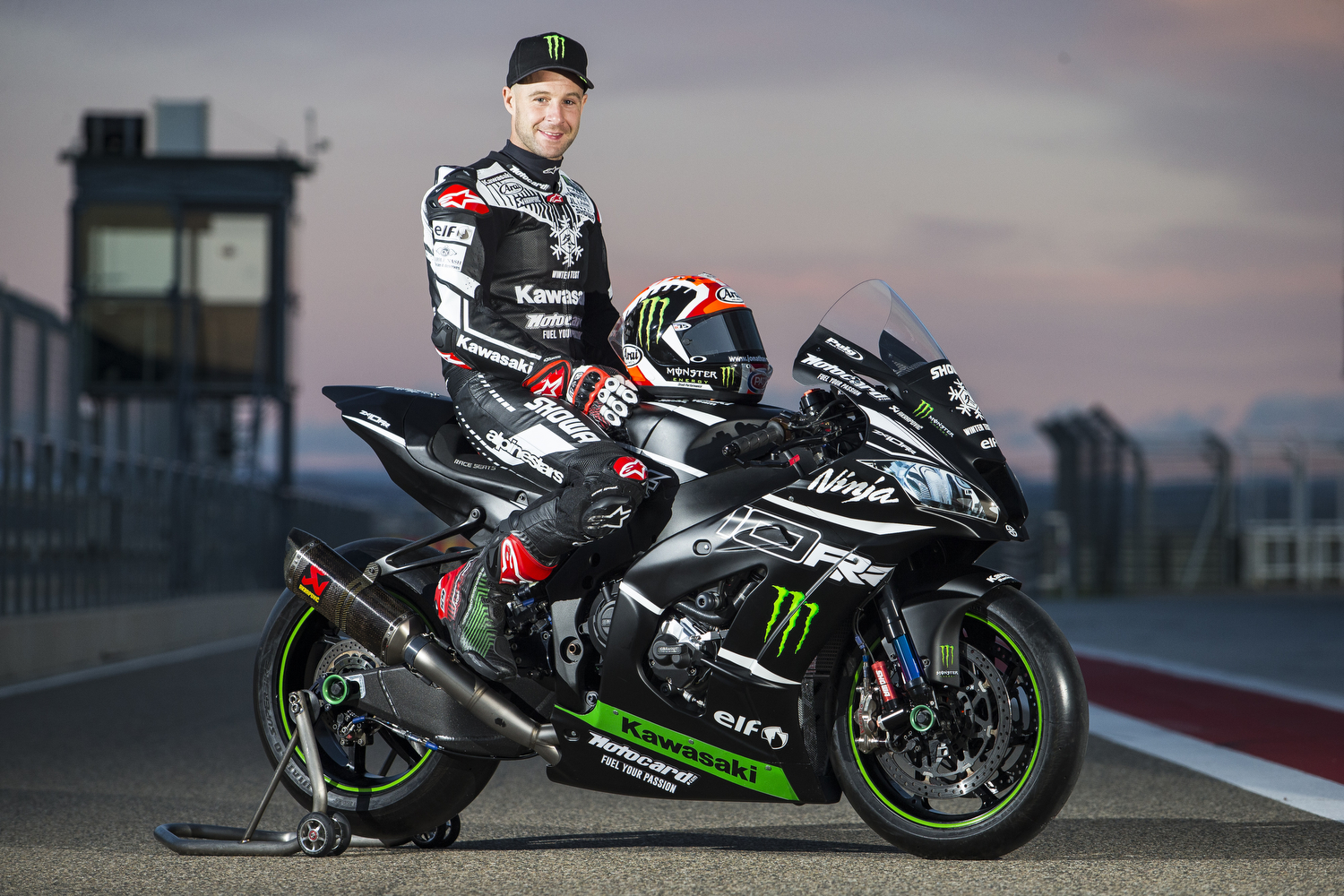 With just a week to go until the bikes take to the track in Phillip Island, Australia for round one of the 2020 FIM Superbike World Championship, five time and defending champion Jonathan Rea reflects on what has been another busy off season.

The dust and sand of the last race of the 2019 season had not long settled when Jonathan was back on track at the first of four winter tests with the Kawasaki Racing Team.  In the second week of November the team were at Motorland Aragon, three hours from their Barcelona base, to start the preparations for the next year.  The weather, however, did not favour them kindly and cold temperatures and rain curtailed the test with Jonathan completing a few laps on the first day only. 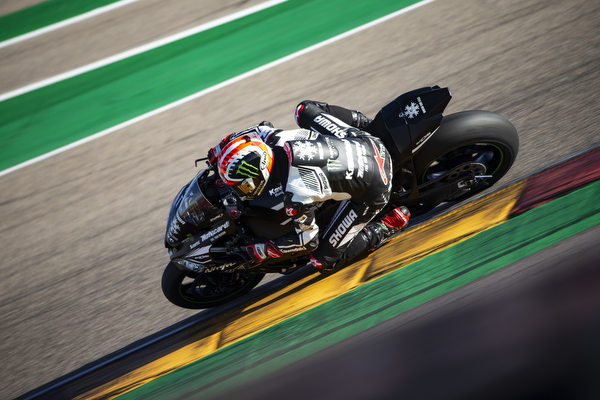 “We were a bit unlucky with the weather and the only track time we could use was in the afternoon of the first day. Even in windy and cold conditions we were able to be fast and we got a consistent understanding of some new components in our test plan. While we had nothing revolutionary to try it is always good to evaluate some ideas that we have to improve our ZX-10RR in the next tests at Jerez, where we were hoping to find consistent conditions.”

Two weeks later in Jerez conditions were indeed better and JR managed a full two days of track time testing a number of different ideas, from chassis set up and engine electronic strategies, to his own riding position.  He signed off 2019 in emphatic style by leaving this test as the fastest WorldSBK rider on track over the two days. 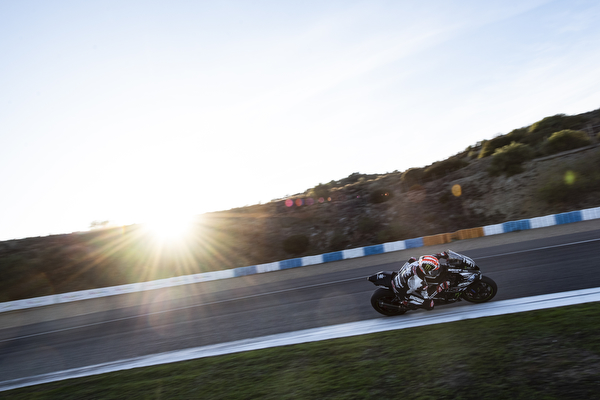 Before the Motorland test and in between the two Spanish tests there was time for flying visits to the EICMA Show in Italy and then Motorcycle Live in Birmingham, UK.  It’s a hectic day of personal appearances with Kawasaki and many of Jonathan’s personal sponsors.  “It’s such a busy day at both shows and the organisers and the team have my day planned out more or less to the exact minute.  There are so many appearances to make but it is great to see and engage with so many fans and I couldn’t even imagine how many autographs I signed. 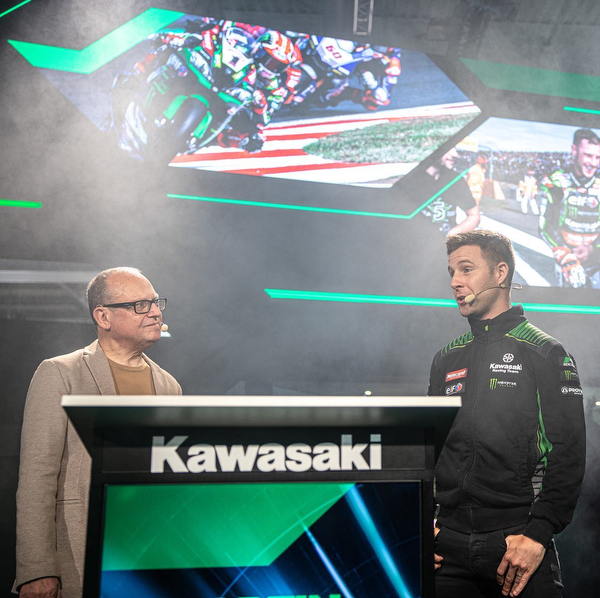 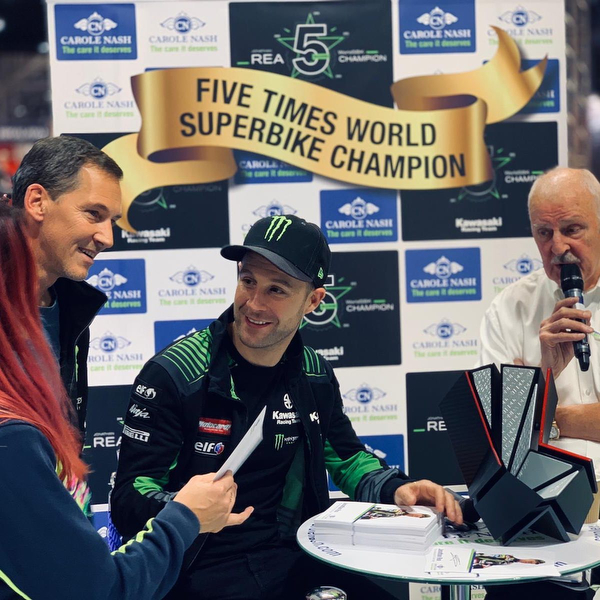 Once the season is truly over many people consider that the riders are in holiday mode until they return to the track in mid January to resume testing, but like EICMA and Motorcycle Live, for Jonathan there is a continual series of events that are arranged throughout the off season and, being world champion, awards ceremonies that he has to attend.

First up was the glamorous FIM Awards in Monaco where he received his Gold Medal as 2019 FIM Superbike World Champion. 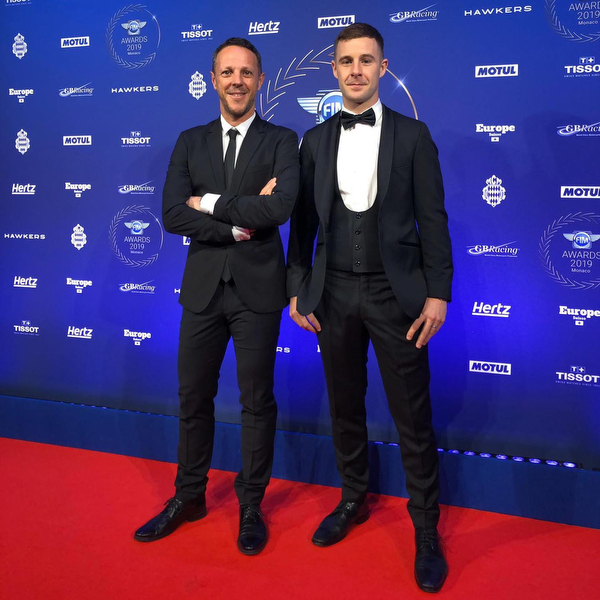 “It’s always good to catch up with the motorcycling community and everyone really makes an effort to look their best at the most prestigious event on the motorcycling calendar, and this year did not disappoint.  Unfortunately, Tarsh couldn’t attend with me this year, but I’d a great evening hanging out with Fabien and my plus one.

Returning from Monaco Jonathan attended the Champions of Motorsport Dinner in Belfast where over £80,000 was raised for the Action Medical Research for Children Charity.   It was then onto “An Evening With” the following weekend.  At the sell out event hosted by BBC NI’s Stephen Watson, Jonathan was happy to review his momentous 2019 season and answer questions from the audience.  “I get so much energy when I see so many people from home come out to support me.  I really enjoyed chatting about the season and it’s was especially good to see Stephen as it was his first public appearance after his recent kidney transplant.  He’s a great advertisement for it too as he has recovered so well!” 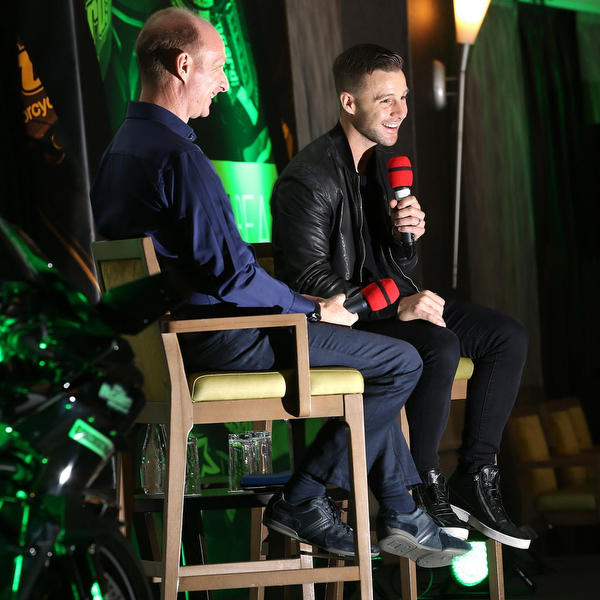 Before December was out there was yet another accolade for Jonathan to receive.  Earlier in the year it had been announced that he was to be given an Honorary Doctorate from Queen’s University in Belfast.  With such a busy schedule in the season it was only now in December that he was able to get along to the University to receive the award.

"It was a great privilege for me to be awarded this honour by Queen's University Belfast. As well as being a local university of international standing in research and education, Queen's punches above its weight in its commitment to sporting excellence. Through its Elite Athlete Programme the University allows students from a range of sporting backgrounds to raise their ambition through sport, as well as gaining a world-class education and I feel that should be celebrated.”

There is another motorcycle rider that some may know who goes by the name of Doctor but now there is really only one true Doctor in racing, Dr Jonathan Rea MBE. 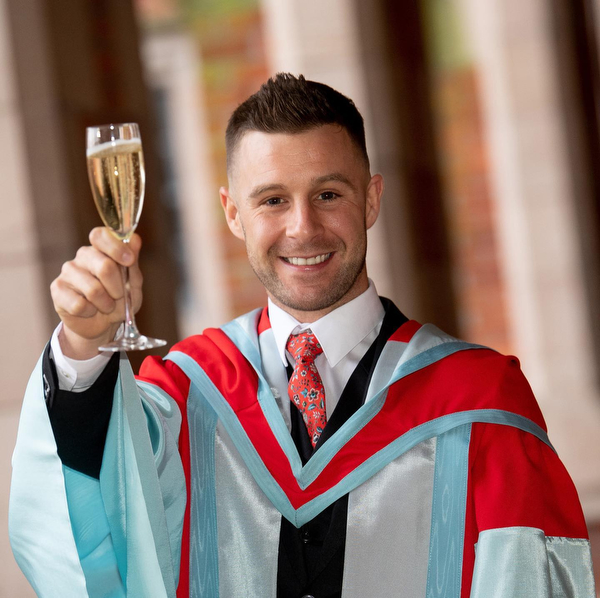 The last official duty for 2019 was a trip to Japan with the ‘Team 65’ crew to visit the Kawasaki factory and headquarters as well as the Showa suspension factory and also celebrate another huge achievement from the year, winning the prestigious Suzuka 8Hours endurance race with Kawasaki, the first time in 26 years for the Japanese manufacturer.  A ‘Thank You' party was held in Tokyo where 120 Kawasaki fans had been invited along to celebrate with the KRT squad. 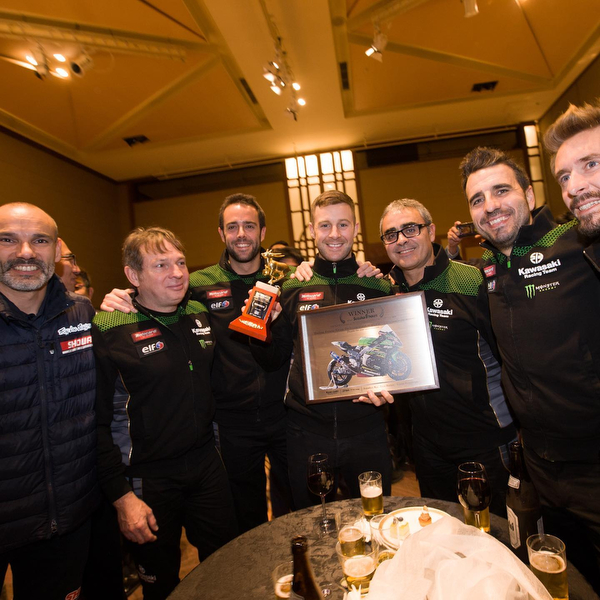 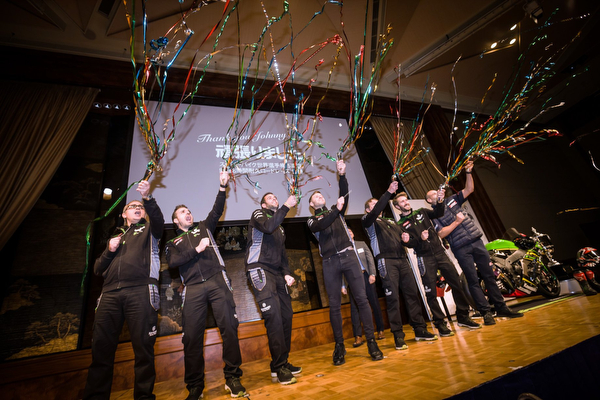 It was the second time Jonathan had scooped the accolade having won it previously in 2017 when he completed a hat-trick of world titles. 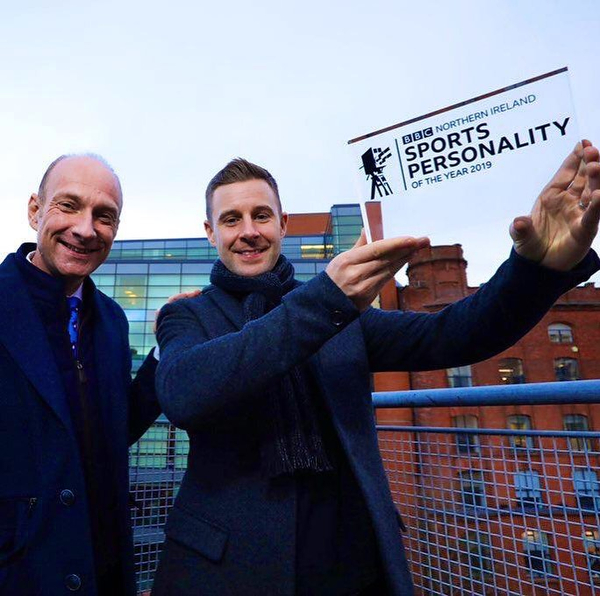 Only then was it time for a holiday.

January started as busy as December had ended with the Irish Motorbike Awards at the Crowne Plaza in Belfast. Once again Jonathan scooped the Irish Motorcyclist of the Year award, taking home the hugely impressive trophy for the seventh time now.

Fresh from the Awards, Jonathan got to indulge in his other passion, motocross, as a special guest at the Belfast round of the Arenacross UK Championship.  Arenacross UK is a series of indoor motocross events held across the UK.  Belfast hosted the first round of the 2020 series in the SSE Arena where Jonathan had the joy of riding his Ninja ZX-10RR race machine into the heart of the Arena, to the delight of the sell out crowd.

“I couldn’t help but get such a buzz from being inside the Arena with a packed home crowd.  Then I sat back and watched the action with my family and friends.  It was awesome! 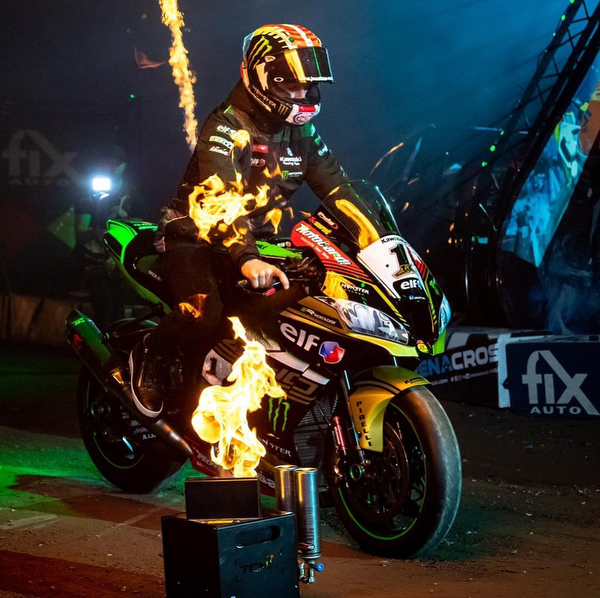 It was then back to business, returning to Spain to continue the winter testing programme with Kawasaki Racing Team.  Another two-day test in Jerez was affected by adverse weather.  Jonathan and his new for 2020 team-mate Alex Lowes had benefited from being part of a video commercial production for Kawasaki Motors Europe and, knowing the weather forecast for the official testing days, they used some spare track time to complete some dry laps on the race machine on the day before.  As forecast the weather was cold and wet over the following two days and JR’s track time was shortened.

“The weather didn’t play ball really. We sat out the first official testing day because the conditions were quite wet and changeable. One minute it was monsoon weather and then a drying track. On the following day we found a track that, although it wasn’t perfect and had a few damp patches that compromised the racing line, was consistent enough to try some items on the bike. We tried to focus on getting the bike to turn a little bit easier and I think we made a step forward in that direction. We also managed to get a few laps in on Tuesday, where we basically confirmed all the items that we had in November. The positives were that we got to try a different balance of the bike.” 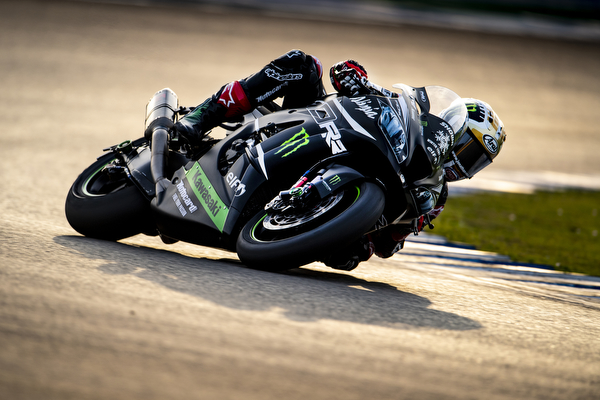 With the winter test programme having been affected by the weather, both in December and January, KRT decided at short notice to make one last day of testing at the Circuit de Catalunya, which is right next door to their workshops in Granollers, outside Barcelona.

“It was so nice to get that extra day after Jerez, because we got really decent weather, the track was dry and we managed to put in a lot of laps. We were able to back-to-back some items that we were not sure about with the weight balance of the bike in Jerez. In the end we tried something on the front suspension and did some practice starts. The big positive is that I really enjoyed the track and the bike works really well here. I think it sets us up in a good frame of mind now. I feel fast and consistent and this positive test has prepared us to go to Australia, where we will start the new season. Thanks to the team for pulling out all the stops to get us a proper test day here because I know it was not in the plan. Next is the team launch where we get to be all excited about our new colours and then move on.”

Whilst Jonathan was busy testing in Spain there was another award to be collected.  This time it was the fiercely contested Belfast Telegraph Sports Star of the Year, voted for by the public.  Obviously, he was unable to attend the ceremony in person, so it was down to his wife Tatia to collect the award on his behalf. 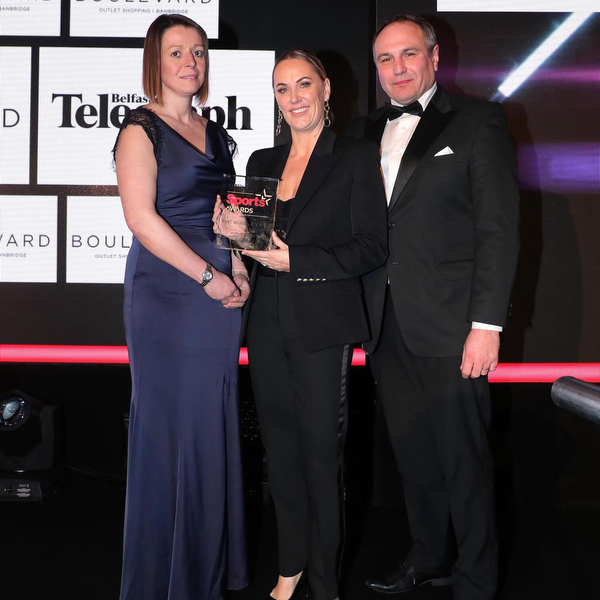 The final elements of the off season fell into place at the start of February, before the long trip to Australia for the first races of the new season.

Jonathan based himself in Granollers, near the KRT team’s workshops, and each day headed to one of the many motocross tracks in the area for an intense week of training.   This is combined with a visit to the Barcelona Institute of Sports for a pre-season fitness and health check up. 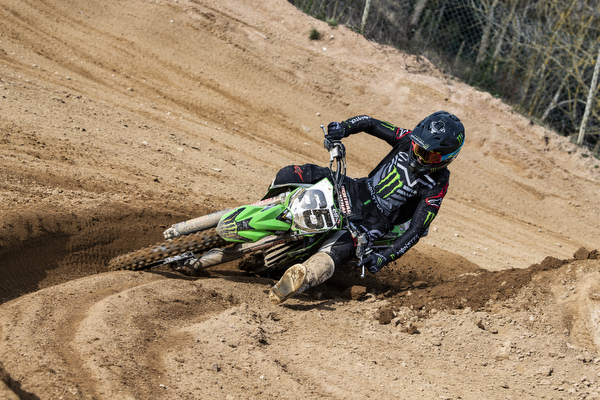 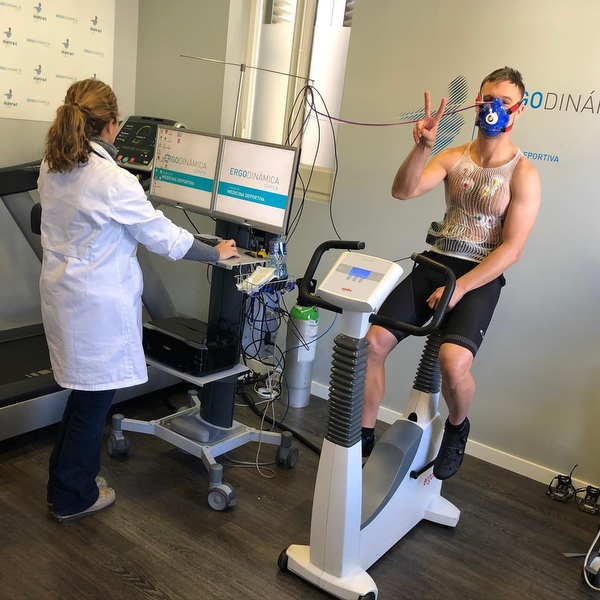 The trip is also at the same time when Kawasaki Racing Team present their new bike livery, this year in front of a packed audience in the workshops.  The presentation took the form of a late night chat show that was streamed live on a number of online platforms.  It was a fun and relaxed atmosphere that concluded with the covers coming off the 2020 Ninja ZX-10RR race machine and JR having the opportunity to get into his new season race leather for the first time. 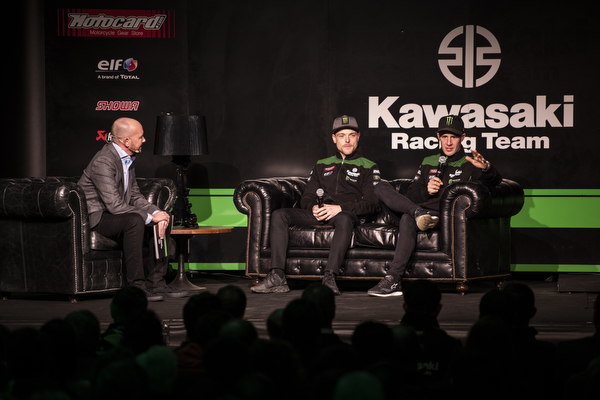 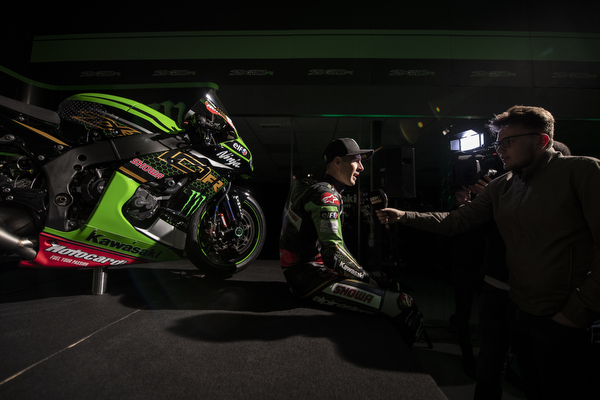 “This is the time when it all becomes real and it is really fitting to do it in our team workshop where all the hard work goes in preparing our bike and our season. It has been particularly nice to do it in front of many of our sponsors and the family and friend of our mechanics. Not long until the season starts now!”

Next stop is Phillip Island and the start of the 2020 WorldSBK campaign.  With such a busy winter Jonathan will be looking forward to pulling down the visor on his Arai helmet, making his way down pit lane and doing what he does best, winning races. 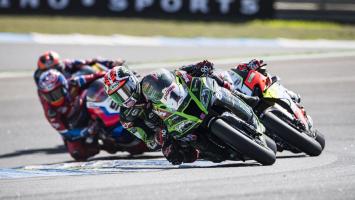